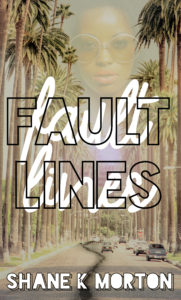 I am so excited to announce that FAULT LINES, the sequal to The Trouble With Off-Campus Housing is set to release on April 2, 2019.

I will be doing a presale on Amazon starting March 25th!

This book continues the adventures of Ursula Moolay (a fan favorite) and takes place ten years after the events in TWOCH. Bobby, Bryan and Kris all make appearances too.

Here is the blurb:

Drag goddess, Ursula Moolay, left Kentucky as fast as her size twelve pumps could carry her and created a new life for herself in Los Angeles. Here, she has found herself surrounded by a group of people with their own secrets and lies.

A daytime Soap stud hiding in the Hollywood closet.

A reality television producer prepared to destroy his star.

An aging showgirl- the complex’s mother hen, fighting to survive
.
A married male escort desperately hiding his profession from his pregnant wife.

And finally, Ursula, pulled into a terrifying ordeal of drugs, murder and deception as she grapples with her own identity.

Can they survive or will they each fall into the cracks of LA’s fault lines?

Are you excited to read about Ursula’s continuing adventures? This is the first of a 3 book series!

This website uses cookies to improve your experience while you navigate through the website. Out of these, the cookies that are categorized as necessary are stored on your browser as they are essential for the working of basic functionalities of the website. We also use third-party cookies that help us analyze and understand how you use this website. These cookies will be stored in your browser only with your consent. You also have the option to opt-out of these cookies. But opting out of some of these cookies may affect your browsing experience.
Necessary Always Enabled
Necessary cookies are absolutely essential for the website to function properly. This category only includes cookies that ensures basic functionalities and security features of the website. These cookies do not store any personal information.
Non-necessary
Any cookies that may not be particularly necessary for the website to function and is used specifically to collect user personal data via analytics, ads, other embedded contents are termed as non-necessary cookies. It is mandatory to procure user consent prior to running these cookies on your website.
SAVE & ACCEPT